A New Push to Get Low-Income Students Through College

The United States fails to do right by most low-income students who excel in school. They overcome long odds and do well enough in high school to show they can thrive in college. Nevertheless, many never receive a bachelor’s degree.

Now, though, the country may be approaching something of a turning point.

As data has made clear how many top-performing students from poor and middle-class families fall through the cracks, a range of institutions has set out to change the situation. Dozens of school districts, across 15 states, now help every high school junior take the SAT. Delaware’s governor has started a program to advise every college-qualified student from a modest background on the application process. The president of the College Board, which administers the SAT and has a decidedly mixed record on making college more accessible, says his top priority is college access.

On Tuesday, a handful of institutions will announce an ambitious new effort on this front. Led by Bloomberg Philanthropies, the coalition is setting a specific goal for which it can be held accountable. Today, only about one in three top-performing students from the bottom half of the income distribution attends a college with a high six-year graduation rate (at least 70 percent). Within five years, the Bloomberg coalition wants to raise that to one in every two students.

The effort has its roots in a meeting Michael Bloomberg convened a year ago at the Madison Avenue headquarters of his charitable group, according to people who were there. With about 20 experts assembled, he asked how he could have an effect on higher education, beyond his alma maters, Johns Hopkins and Harvard. The group talked about top-performing lower-income students, among other topics, and Mr. Bloomberg ultimately chose them as his initial priority.

“If we really believe that America is the world’s greatest meritocracy — and I do — then we can’t sit back and tolerate a situation where so many talented young people who have the grades to get into top colleges are not going to them,” Mr. Bloomberg told me, by email, on Monday. “We’ve got to change that.” 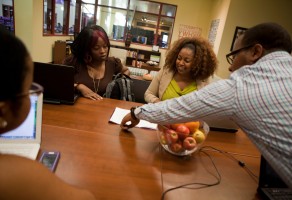 The crux of the new effort will be college counselors, available to advise students on where and how to apply, both for admission and for financial aid. The coalition – which includes Khan Academy, the College Board, the Jack Kent Cooke Foundation and others – will ultimately hire 130 full-time counselors and enlist 4,000 college students as part-time advisers. Using video chat, email, telephone and text, they will mimic the support network — composed of guidance counselors, teachers, parents and friends — that more affluent high-school students take for granted.

Most of the counselors will themselves be college graduates from modest circumstances. Their message, in its essence, is, “If I can do it, you can do it, too,” said Nicole Farmer Hurd, founder of College Advising Corps, which is part of the effort.

On Monday, the coalition sent emails to 24,000 lower-income students with academic records suggesting they would do well at top colleges. Many eligible students will also receive four application-fee waivers. Previous research has found that basic information about college, along with application-fee waivers, can change the behavior of low-income students who wrongly assume many colleges are beyond their reach.
Academic researchers will study the Bloomberg program to see which parts are working, and the group will make later funding decisions based on the findings. Initially, Bloomberg will spend $10 million over two years, and the Heckscher Foundation for Children will add $1 million.

Evaluation is certainly crucial. But the biggest question, to my mind, is how colleges will react if they receive substantially more applications from qualified low-income students than today. The Bloomberg effort does not include additional money for financial aid, and its advisers will try to steer students toward colleges that require less debt. So the colleges that admit more low-income standouts will be left with less tuition revenue.
Colleges will then face a series of choices. Administrators could decide that they are not especially interested in economic diversity, even if they publicly assert otherwise. (On some campuses, including Caltech, Dartmouth, Notre Dame and Washington University in St. Louis, fewer than 15 percent of entering students receive federal Pell grants, which go roughly to students from the bottom two-fifths of the income distribution.)

Or the colleges will have to find new ways to save and raise money. “Not everything we spend money on is as valuable to academic excellence as need-based financial aid,” said Dan Porterfield, the president of Franklin and Marshall College, who attended the Bloomberg meeting last year.

If you’ve been in a sleek new college building lately, you know how true that is.

Another possibility is that the outside groups that finance colleges – including the federal government, state governments and foundations – will put more emphasis on access. Today, many financial aid dollars flow to relatively well-off families that would send their children to college no matter what. As part of the Bloomberg effort, the Aspen Institute will put together a committee of college presidents and others to study financing, among other subjects.

Depending on how you look at it, the new effort is either broad or narrow. It is reaching out to as many as 70,000 students a year and trying to persuade more than 10,000 of them to change their behavior by attending any one of 250 colleges where low-income students graduate at a high rate and with manageable debt. Those colleges include elite private universities as well as state universities like Stony Brook, Iowa, Purdue, North Carolina State, Illinois State and the University of California, Santa Cruz.
As big as these numbers are, they clearly represent a small slice of the country. The 70,000 students, for example, make up only about 5 percent of all students from the bottom half of the income distribution. By themselves, they will not solve this country’s issues with education or social mobility.

It is a big mistake, however, to dismiss these students – or the colleges with high graduation rates – as unimportant. Yes, the country needs to worry about improving the quality of its K-12 education and about lifting graduation rates at colleges where dropping out is the norm. But the students who have overcome the odds to graduate from high school with stellar records can’t wait for those changes.

They are graduating into a tough economy – and one in which the pay gap between college graduates and everyone else is at a record high. They’ve earned the right to succeed, even if their success won’t solve all of our problems.